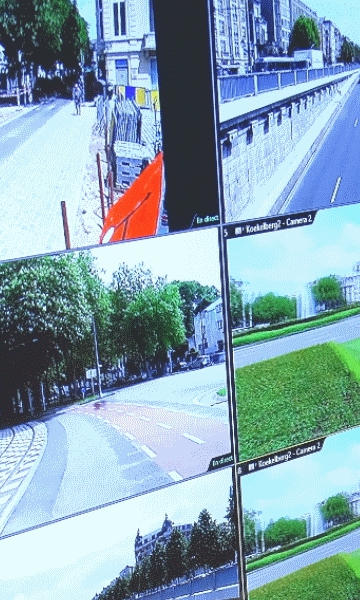 The regional CCTV image sharing platform was officially brought into service on 14 July 2015, with the activation of image flows from the 140 video cameras in the Brussels West police zone. So this flagship project of the Brussels-Capital Region smart city has now entered the implementation phase.

Safety is an essential element of the smart city, particularly as regards smartcity.brussels. The Brussels-Capital Region aims to implement its vision of the smart city by facilitating image sharing from the CCTV cameras operated by the various Brussels authorities.

This is the context in which the Brussels-West Policy zone (which covers 5 of the 19 communes of the Brussels-Capital Region: Berchem-Sainte-Agathe, Ganshoren, Jette, Koekelberg and Molenbeek-Saint-Jean) has joined the regional smart city strategy.

In practical terms, the Brussels-West police zone is the first Brussels entity to become active on the regional CCTV image sharing platform. The images from the 140 video cameras deployed around the zone are relayed by this platform.

Other police zones to be added

Other police zones are to be added to this smartcity.brussels project at a later stage, along with the STIB  – the Brussels public transport company, Brussels Mobility and the Port of Brussels. The platform takes part in the smart use of CCTV images, for instance by facilitating the real-time follow-up of incidents on the ground, which benefits intervention coordination and response times.

The CCTV image sharing platform also contributes towards improving road safety and ensuring more efficient management of traffic flows in the event of accidents or demonstrations. Respect for privacy is guaranteed by the Brussels regional supervisory committee set up under the auspices of the Brussels parliament.
Inauguration of the regional CCTV image sharing platform (French)
Keywords :
Back to news

Get involved in the smart future of Brussels!

The smart city is oriented to its citizens and businesses… and listens to their ideas.